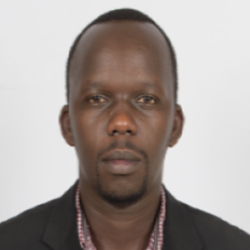 Laban Kipkemoi Rotich is a Tutorial Fellow at The Technical University of Kenya in the Department of Hospitality and Leisure Studies and a member of the ACU’s Commonwealth Climate Resilience Network (CCRN). Laban has over ten years of teaching at University level and has been actively engaged in research works within the field of tourism, where he has been published widely in high impact tourism journals. His research themes are primarily focused on climate change. In this blog, Laban discusses how his studies as a tourism student led him to discover a passion for climate change research, and uncovering how climate change is impacting wildlife and tourism sustainability in Kenya.

Back when I was a Masters student at Moi University, Kenya, I was considering different topics for my final year research project.  It was at this point that I had the idea to research climate change. As a tourism student, I was interested in uncovering how changes in rainfall and temperatures along with droughts and floods would affect the tourism industry, and more importantly, the livelihoods of the people that depend on it. Given that the tourism industry in Kenya is heavily nature-based and dependent on wildlife, I sought to understand the opportunities as well as challenges that climate change would pose.

Climate change is among one of the most serious global challenges we face. Many parts of Africa have, and continue to experience, irregular and unpredictable rainfall – and some regions also grapple with severe floods. The impacts of climate change and accompanying socio-economic consequences on communities remain exceptional challenges for Kenya.

In Kenya's Maasai Mara National Reserve, researchers assert that a combination of variables, including climate change, has resulted in catastrophic reductions in wildlife populations. According to the dynamic global vegetation model 54 of the 855 wildlife species (6%) in the Greater Maasai Mara may find the future climate inappropriate by 2050, while 101 of the 793 species (13%) in the reserve may no longer find their habitat climatically favourable by 2050.

Climate change is likely to be a major driver for the extinction of migratory and resident wildlife species, and it has the potential to cause far-reaching consequences for tourism destinations mainly dependent on natural resources. Consequently, it can lead to the socioeconomic vulnerability of communities depending on tourism due to reduced attractiveness and lower tourism activity and related income.

My passion for research around climate change continued throughout my PhD, where I studied the effects of climate change on natural resource and tourism sustainability in the Maasai Mara National Reserve. This research focused on broadening the knowledge base as well as deepening and increasing the understanding of potential climate change impacts on wildlife and sustainability of tourism.

As part of my research, using satellite images the normalized difference vegetation index (NDVI) technique was used to evaluate changes in vegetation cover throughout the Reserve. Rainfall and temperature data was also analyzed using the Man Kendall trend test. With the help of SPSS, quantitative data was analyzed using statistics. The colour ramp below shows the level of vegetation across the Maasai Mara National Reserve in 1975 versus the year 2000. 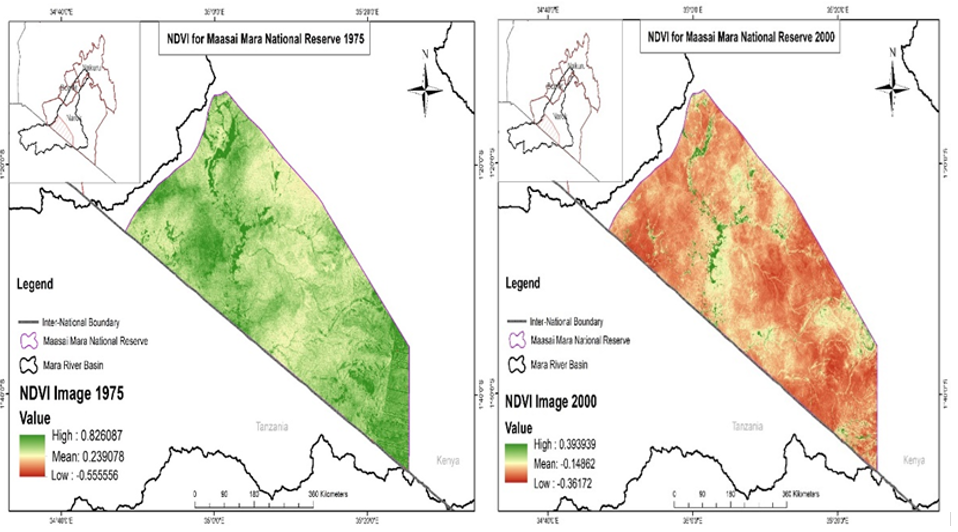 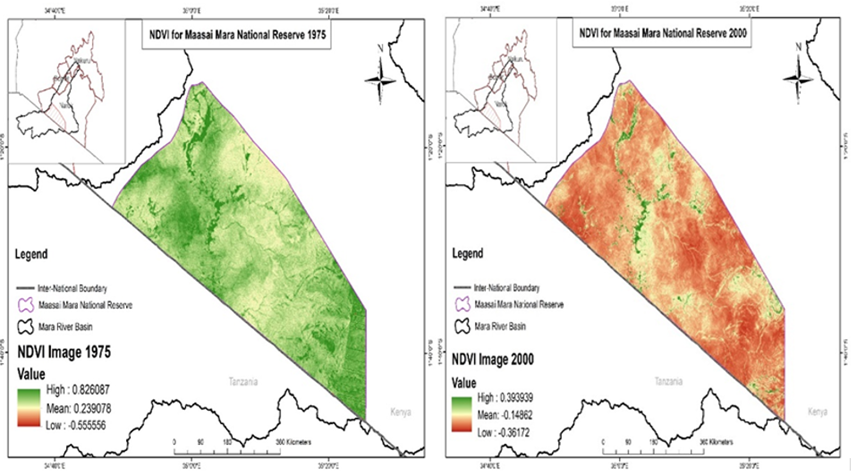 By contrast, the year 2000 was the worst year in the reserve. There was very little vegetation distribution with a low NDVI value of 0.3. The year 2000 experienced the lowest level of rainfall ever, with an annual calculated mean of 928 mm. The majority of the areas in the reserve are red in color indicating very low vegetation, implying a high likelihood of a decline in the wildlife population. This is supported by the elephant and wildebeest population levels, which show a declining trend from the period 1977-2001. Changing rainfall patterns via drought events are therefore directly affecting the survival of our wildlife populations.

Wildlife stakeholders must anticipate the impact of climate change to best safeguard our wildlife and livelihoods that depend on it. Knowledge of climate change adaptation and mitigation strategies need to be more widely understood to best protect our natural world for generations to come. Findings from my research study have the potential to provide an understanding of the complex relationship between climate change, natural resources and tourism. This will enable tourism stakeholders to capitalize on opportunities posed by climate change, as well as strengthen their resilience and adaptive capacity to the negative effects of climate change. The findings will also offer data for future tourist investments. More importantly, tourism stakeholders will be better positioned to anticipate what is likely to occur and develop appropriate plans to mitigate potential negative effects of climate change. Finally, the study findings have the capacity to inform Government guidelines, operating procedures, strategic plans, and legal frameworks in combating climate change impacts.