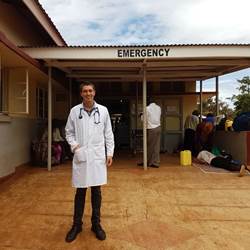 Alexander Mount was awarded an Edward Boyle Medical Elective Bursary during his final year at the University of Warwick, UK.

The Edward Boyle Medical Elective Bursaries, managed by the ACU, help medical students in the UK to obtain practical experience in a low or middle income country of the Commonwealth and to learn more about global health concerns. Here, Alexander Mount from the University of Warwick reflects on his experience at a hospital in Jinja, southern Uganda.

When I left for Uganda, I had little idea of how much I would learn. But the answer is a lot! In just over a month, I went from being largely an observer to being directly responsible for peoples’ lives. I had to learn to remain calm in the face of the unknown, approach patients systematically, and, most importantly, know when to get help. Dealing with this pressure has been a difficult but invaluable experience.

My six-week elective was spent in the emergency department of Jinja Regional Hospital in Uganda. I was keen to gain experience in a lower resourced setting where clinical skills are key and where staff shortages meant I could become a valued member of the team, rather than just an observer.

Jinja’s emergency department has 15 beds, catering for about 10-25 patients at any one time. It is staffed by two intern doctors – doctors who have graduated within the last year – two nurses, and around 15 students of varying disciplines. There is no privacy between beds and, with patients, staff and family members all crammed into a relatively small space, it is crowded. In terms of resources, they are basic and vary from day to day; it was often a bit of a lottery as to what was available.

My time was spent acting much like an intern. The real interns were there to help if needed and I relied on them frequently, but I still found myself dealing with cases fairly independently. The alternative was to do nothing while awaiting review of my clerking, but the doctors were so busy that even critical cases were often left for hours before being seen. I could, at least, make a small difference by initiating treatment in the meantime, naturally in a safe and legal manner.

Of course, I also picked up plenty of practical skills. I can cannulate and catheterise with my eyes closed (not that I did, of course!) and my ability to communicate via mime with patients whose English was poor is on point! I also spent time suturing, inserting nasogastric tubes and, during the final two weeks, taught history and examination skills to junior medical students.

Dealing with the emotional side of medicine was also important. The six weeks I spent at Jinja were fantastic: I loved the busyness, the energy, and the constant pressure to perform. Yet the emergency department was sometimes a tragic place. I will never forget the first patient I lost. He was a 17-year-old that I battled hopelessly to save after he was crushed by a falling tree. The interns came, said nothing could be done and asked me to keep the boy comfortable as an intracranial bleed stole first his vitality, and then his life. I watched him slip away surrounded by his family. It nearly broke me when I had to tell them that, despite our best efforts, he had passed away.

Medicine is full of difficult stories like this and unexpected death is something that I will have to deal with. What’s important is to deal with it in the right way. Everyone working in Jinja had suffered a similar loss. They were empathetic, willing to listen, and helped me to work through the pain. Ultimately, emotional attachment to our charges is essential to being a good doctor; to give our patients the best, we have to care about them. Yet there has to be a balance between empathy and detachment. Getting this right takes a long time to achieve and, in the meantime, being open and talking to those who have attained this balance is key. All of this is a bit gloomy but I wanted to share the experience: it is these lessons, as much as the practical skills, that I brought back with me to the UK.

My time in Uganda will undoubtedly impact my future practice. As well as being a better practical clinician, I am also much more confident in my ability to make decisions. My communication skills have improved, my understanding of medicinal conditions has been enhanced and, when I start working in August, I feel much better prepared for the difficulties and uncertainties that life as a newly qualified doctor will bring.