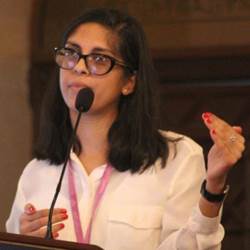 Head of Marketing and Communications, and host of The Internationalist - the ACU's podcast

The first series of The Internationalist, a new podcast from the ACU, looks at the critical question of ‘Who gets to learn, and who gets to teach?’. With thanks to Professor Adam Habib, incoming Director of SOAS, University of London, UK and Vice-Chancellor of the University of the Witwatersrand, South Africa, and Professor Jonathan Jansen, Distinguished Professor of Education at the University of Stellenbosch and President of the Academy of Science of South Africa for their contributions and ideas in the first episode, many of which are outlined below.

Around the world – from South Africa to Australia, from Canada to Kenya – we’ve seen protests against current racial injustices and demands to address historical wrongs, which are often accompanied by calls for decolonisation. But what does decolonisation actually mean – especially for higher education?

The term ‘decolonisation’ has historical roots in the 1950s and 1960s when countries across Africa and Asia were becoming independent from former colonies. Just as the roots of decolonisation came from leading African intellectuals who became leaders in the independence movements, so did a consideration of gender and sexual identity as these freedom movements grew.

More recent interpretations of ‘decolonisation’ look at the lingering effects of colonial rule that are still present today, such as English being the dominant language in higher education, and many seminal texts being drawn from the West.

In 2020, the global protests that gained momentum following the murder of George Floyd led to statues falling and flags being taken down – moments that generated headlines across the world and have massive symbolic importance. However, as argued by Professor Jonathan Jansen, ‘these are seldom sustainable actions that translate into wider, structural and institutional changes’.

The challenge is how to translate these moments into debates around decolonisation that lead to sustainable change. A critique from Professor Adam Habib is that these debates happen primarily in the political arena, without engaging enough scholars and critical thinking. While it is important to surface knowledge from historically disadvantaged communities ,we need to be open to critique and challenge.

‘Too often we are so politically correct in this debate that we don’t want to say: ‘Actually, certain of this stuff is really nonsensical and actually too much of the decolonisation debate is coming from a nativist framing.’ – Professor Adam Habib

And this is where universities have a crucial role to play. It is the very purpose and mission of universities to create intellectual discomfort and stand for freedom of thought, allowing us to train citizens of the 21st century who have the ability to address global challenges.

While the purpose and mission of universities is strong, universities themselves need to be reimagined to become more in tune with today’s context. We are more connected than ever as a global community. Climate change, political and social polarisation, inequality – these are complex global problems that need a broad range of methods and disciplines to overcome them. Yet, many universities’ programmatic curricula still have their roots in the late 18th and early 19th centuries, when the world was a very different place.

Both Habib and Jansen took COVID-19 as an example of when the traditional colonial structures of universities may no longer work. The pandemic has shown us the folly of relying entirely on one discipline, in this case science, vital though it has proven to be. COVID-19 doesn’t just require scientific and medical interventions. For behavioural change – such as social distancing – to work, the humanities are needed to provide an understanding of how humans and societies behave.

This should be a trigger for universities to start to reimagine themselves – breaking down the silos between disciplines and looking beyond disciplines to create the professionals and knowledge structures that are capable of addressing the global challenges of our time.

‘Don’t use the colonial institution as the parameters of the reimagination. Tolerance and open debate has to be non-negotiable in the deep deliberation that is required at this historical moment.’ – Professor Adam Habib

At an academy level, decolonisation requires diversity. It is not as simple as replacing a Western-based curriculum with an African-centered one, because the world isn’t that binary anymore.

Jansen points to the University of Witwatersrand as an example of excellence. The university is bringing in scholars from across the continent who enrich and decolonise thinking by contributing wider perspectives of what it means to be African in a postcolonial world, which then means new ideas are filtered into the curriculum.

You can discover more podcast episodes here, or by searching for The Internationalist on your preferred podcast platform.

Transforming universities for a changing climate