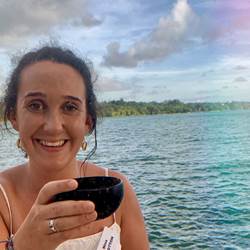 Nina is a PhD candidate at the University of Adelaide – her research focuses on microplastics in seafood. Earlier this year Nina was awarded an ACU Blue Charter Fellowship which allowed her to travel to Fiji, where she was hosted by the University of the South Pacific.

Waking up at 6am and heading to the busy, bustling Fiji fish markets was how the majority of my days in Suva began. Walking up and down the seafood stalls, greeted by the different fish mongers who had well and truly begun to recognise me, trying to spot the species I needed for sampling. It was here that I met my namesake or 'yaca' as the Fijian's like to call it... her name was Nina (just like me) and she was my go-to fish monger, and pretty much the first friendly face that greeted me every morning. I trusted Nina with all the information she gave me, met her grandkids, and even cried a little bit when I had to bid her farewell on my last day. Once I had made my purchases (on some good days I was able to get at least 20 fish, on bad days I came home empty handed) I headed back to the marine lab, at the University of the South Pacific (USP), to start dissecting and searching for microplastics.

Nina and Nina in the fish market!

My PhD research involves quantifying the amount of microplastics in the guts of commonly eaten fish species in Australia. Luckily, the ACU Blue Charter fellowship has allowed me to sample another southern pacific country, being Fiji, and gather enough data to make a direct comparison between the plastic consumption in fish in Fiji, to the same species in tropical Australia.

During my three months in Fiji I sampled over 130 fish, testing their stomach contents for microplastic abundance. I sampled four species (mullet, red snapper, coral trout and goat fish), and collected around 30 fish from each. I spent the majority of my first month researching market availability and fish species, while my second month was mostly spent in the lab, dissecting the fish and recording life history and general information on them. The remainder of my time was mostly spent looking at my samples under the microscope, counting, categorising and collecting all the pieces of plastic that were in the fish guts. I was able to get through this stage of my data collection faster than I predicted, which allowed me some extra time to complete some initial statistics on my data. Results are showing that on average, with the species I sampled, around 53% of fish have at least one piece of plastic in their stomach.

As well as sampling in Fiji, I was also asked to travel and act as a rapporteur at a series of marine pollution workshops and conferences that were being run in the South Pacific. These events are another component of the Blue Charter, with funding coming from the UK government to run the Commonwealth Litter Programme (CLiP). CLiP begun in the South Pacific, and amongst scientific data collection and extensive education programmes, also ran a series of workshops in Vanuatu and Solomon Islands and a regional conference in Port Vila. Attending and working at these events provided me with amazing networking opportunities with the marine litter community, as well as gaining new skills.

Nina drinking 'kava' (a very popular drink in the South Pacific!) at one of the CLiP workshops in Vanuatu.

I had so many high points throughout my time in Fiji. From the smile that came across the face of Nina my fish monger whenever she saw me enter the market, to the amazing collaborations and friendships that have been formed with my colleagues at USP. The fellowship was definitely a huge success for me personally. I definitely felt myself grow as a scientist during my time in Fiji, as I became more independent and confident in my methodology. This fellowship has given me opportunities to live and grow in a different culture, meet amazing scientists and enjoy some of the best three months of my life.

The networking opportunities I gained through the fellowship have allowed me to establish connections that I hope will last my whole career. The ongoing collaboration between USP and the University of Adelaide will most definitely be maintained and I will definitely be keeping in close contact with my supervisor from USP, Professor Marta Ferreira as we work through the data, and for any future ideas. I have also already been in close communication with other members of their plastic pollution team, as they are now both colleagues and close friends! We were lucky enough that Rufino Varea from USP and me switched places during the fellowship, so we have a lot in common. Already I can see this collaboration lasting many years, and Rufino is coming back to Adelaide in July, where we will spend lots of time together.