If you’re wondering what happens when you bring together bright minds from across the Commonwealth to unpack global challenges, then look no further. From 2-13 August, this year’s ACU Summer School connected students online from different disciplines and countries to explore themes relating to urban disasters, risk, and vulnerability in a pandemic.

One of the key aspects of the ACU Summer School is its multidisciplinary scope, with representation from a wide range of fields such as law, anthropology, disaster management and more.

By bringing together such a diverse cohort of students and speakers – each armed with their own respective areas of expertise and perspectives – group projects were designed to tap into the power of international collaboration to bring different ideas and solutions to the table. Each group was assigned a different theme, including livelihoods of informal sector workers; gender; solid waste management; micro, small and medium enterprises (MSMEs); health; child protection; ecological security; food security; access to water; and water supply and education. The projects helped students to not only learn and absorb new knowledge, but to also actively apply the theory to real-life case studies across different contexts.

While students logged in each day from different countries and environments, they all worked in unison on the following three group activities and projects:

Each activity was assessed by a panel of judges, and it was through these individual and group activities that their ideas and perspectives came to life. We are delighted to showcase the work of the winning groups and students.

Each of these three pieces of work cuts across different themes and conveys findings in a different format. A huge well done to all students for their work and we look forward to seeing how this knowledge is applied in their respective studies and future careers. 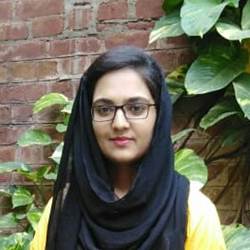 Meet Parveen, Nasreen, and Nasira – the female workers in Girls Hostel, GC University, Lahore, Pakistan. To explore community vulnerability and resilience during the COVID-19 lockdown, I talked to people who are engaged in the informal sector and are unregistered (for example, those without social security). I interviewed these three women and each of them had a different story to tell.

Parveen, a mother of five children and the only breadwinner of the family, was unemployed during the lockdown. Two of her children contracted COVID-19 and a lack of basic life necessities affected her physical and mental health during the pandemic. Nasreen told me that her husband worked in a shoe factory before the lockdown left him unemployed at home. This was also the case with Nasira, whose children could not get an education because she was unable to afford internet for virtual classes and exams. Similar stories relating to livelihood stressors such as inaccessible education, poor health conditions, and mental illness were reported by the rest of the serving staff.

However, the drivers of unemployment predated the pandemic. With little research on the profile of informal sector piece-rate workers, I came across the astonishing statistic that alongside the pandemic, other disasters such as urban flooding in Karachi, desert locust attacks, and food crop eradication due to monsoon flooding alone affected approximately 75% of the estimated 70 million informal labour workers throughout the country. This large-scale unemployment resulted in social instability.

To quote author Anna Harrington’s famous line – ‘Where there is a will, there is a way’. Fortunately there was a way for this community to respond with resilience. Community resilience was enacted in several ways:

These national-level initiatives helped to build resilience at community level for underprivileged people like Parveen, Nasreen, and Nasira during the pandemic. They got a monthly stipend under the Ehsaas programme which improved living standards, in addition to weekly grocery grants and access to a food bank to combat hunger. Their children received an education from home via television with a reduced course syllabus.

Nasira’s husband started to work under the Green Stimulus programme, which was a major economic relief to her family. Her son started to learn digital skills on TV and is working in a local company, in addition to receiving a labour package grant. Parveen’s son recovered from COVID-19 and, with the help of the MHPSS radio livestream, she managed to remain calm during calamities. Nasira started working for the Tiger Force initiative and earned a monthly stipend with free food and education for her children. I was amazed and happy to know that these women and other staff strictly followed preventative measures relating to COVID-19. In my opinion, this was the major factor in building the resilience of this sector.

The ACU Summer School is an annual two-week event which provides students across the Commonwealth with a platform to discuss themes of global importance. Previous events have looked at a diverse range of topics, from health to migration, environmental arts and humanities to sustainable communities.

Drawing on the the expertise of subject specialists at The School of Disaster Studies, Tata Institute of Social Sciences, Mumbai, this year’s programme looked at urban disasters alongside concepts of disaster vulnerability, risk and resilience.