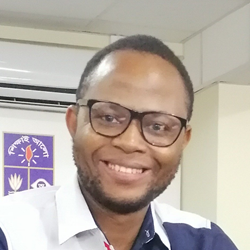 No matter where Queen Elizabeth Commonwealth Scholarship (QECS) scholar Yusuf Brima is in the world, he strives to create impact. From co-founding an NGO to train young people, women and people with disabilities in Sierra Leone, to building a platform to support the mental health of students at the University of Dhaka in Bangladesh – Yusuf’s goal to effect change remains the same. Read about his experience below.

‘Education is the fabric of our society. If you have a literate society, a lot of developments can happen.’ – Yusuf Brima

With two parents as teachers, the fact that Yusuf is passionate about education is perhaps unsurprising. Higher education has played a significant role in his life. He received a Queen Elizabeth Commonwealth Scholarship (QECS) in 2018 and it was at university that Yusuf met his fellow co-founders of African Accents International Sierra Leone (AAI-SL)– an NGO born out of the desire to address the education gap in Sierra Leone.

AAI-SL is based in Makeni, the fourth largest city in Sierra Leone, and supports people who can’t afford a formal education. From IT to auto mechanics and tailoring, the organisation equips the local community with training in a range of vocational fields.

‘We had an 11-year war in Sierra Leone from 1991 to 2002 so, during that period, a lot of people could not go to school. Some of us were fortunate because our parents sent us to the capital city, but there are many young people in their late 20s early 30s that do not have the necessary skills to be employed.’

In addition to young people, Yusuf and his team also empower women, children, and people with disabilities through education and training. This training enables them to grow their skillset and find employment, which helps to advance national growth. Yusuf explains that if a multi-national company comes to Sierra Leone and they are looking for talent and deciding who to employ, it's going to be people that truly match the right skill set for the job. ‘In that regard, we are making a big step by maximising human capacity.’

Where Yusuf sees a problem, he wants to fix it. He strongly believes that a lot of global problems can be traced to a lack of education. Yusuf’s problem-solving nature underpins his interest in Computer Science, and his research in neuroscience and artificial intelligence (AI), at the University of Dhaka in Bangladesh.

‘It's about creating systems that can behave intelligently. If you build systems that are intelligent, they can be harnessed to solve human issues, such as climate change, food insecurity, and mass migration for example.’

During lockdown, Yusuf used his programming skills to help build a telepsychiatry platform to offer online counselling across Bangladesh. He is also working with the National Institute of Neuroscience and Hospitals in Bangladesh to help form the first Computation Neuroscience Research Lab in the country.

You can’t learn everything from a textbook, however. Living life in a different country, experiencing a different culture, and observing different surroundings is key to understanding common global issues. Studying in Bangladesh exposed Yusuf to this.

‘Bangladesh is a place of very, very big contrast. You can see a 50-story building standing over there and then you see those makeshift buildings right by it, where people are going hungry. So that is a visible reminder of this sense of inequality which is one of the biggest challenges facing the planet. The main thing that stays with me is the fact that there are problems that cut across different contexts, whether you're from Africa, Europe, or the Americas - the problems of inequality problems or bad governance can still persist.’

Yusuf’s QECS experience was not just confined to his studies. Reflecting on his time in Bangladesh, Yusuf recalls visiting places which some of his fellow classmates and colleagues had not even visited themselves. After making friends with classmates from Bangladesh, he visited their villages, learnt about their culture, and even attended wedding ceremonies.

These connections were really important. ‘You cannot grow alone, you grow together’, Yusuf explains. Socially, his experience was an eye-opener, but he also credits his QECS as equipping him with a network of like-minded peers to collaborate with in the future. Meeting people with shared values and similar research interests was a source of inspiration for Yusuf.

'I am very excited to contribute to this field as it is one of the defining areas of human civilisation. AI is poised to transform all facets of society as it is increasingly being adopted into our lives, from mundane personal assistants such as Siri to protein structure and function prediction using DeepMind AlphaFold to predictive policing', Yusuf explains.

Beyond contributing to scientific knowledge in this area, Yusuf is passionate about championing diversity and inclusion in the AI research community.

'These AI systems are built by humans, and we humans have implicit biases which are consequently reflected in the data used by the models. Issues such as bias, fairness, and other ethical concerns become crucial factors to be taken into consideration. Thus, diversity and inclusion play a vital role in making sure that underrepresented communities from the Global South are actively involved in building these powerful tools that have unprecedented consequences on society', Yusuf reflects.

Yusuf's advice for others? 'You have to select something that you really feel deeply passionate about, something you truly believe in, because if you're truly passionate about something, even if it's difficult, you will always find it fun. The second thing that I normally tell people is, when you solve problems you create value in society and incentivise others to also be a problem-solver.’

A Queen Elizabeth Commonwealth Scholarship is a unique opportunity to study for a two-years Master’s degree in low or middle-income country of the Commonwealth.

Aimed at students who are committed to creating change in their communities, the scholarships are a life-changing opportunity to experience a new country and culture, to broaden horizons, and to build a global network that will last a lifetime.

Through cultural exchange and academic collaboration, Queen Elizabeth Commonwealth Scholars help bring about positive change and find solutions to the shared challenges we face – both in their home countries and those that host them. As an active part of the Commonwealth network, scholars will help shape its future.

There are two application cycles to cover the academic years which start at different times across the globe, with some taking place July - October and others between January - February.