Decolonisation and Black Lives: The case of the UK and the Commonwealth

The ACU is supporting this online series organised by The Round Table: The Commonwealth Journal of International Affairs and the International Development Department at the University of Birmingham. 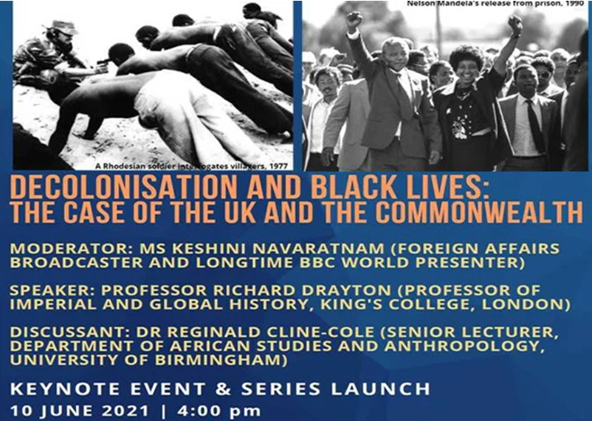 The British Empire was, in large part, built on the exploitation of black bodies and the early ‘imperial’ Commonwealth was ‘white supremacist’ in its character and outlook. In the post-war period, however, the expansion of the Commonwealth to include many newly-independent nations, the formation of a neutral Secretariat, and the struggles over race in southern Africa  saw the emergence of a new Commonwealth, committed to political and racial equality.

In the light of current debates about decolonisation and the Black Lives Matter movement, can the Commonwealth today offer a model for reconciliation and understanding, addressing a sometimes troubled shared past and pursuing a vision of a post-racial and democratic future? Or is it irredeemably tainted by the symbols and memories of its imperial history?

This online series, organised by The Round Table: The Commonwealth Journal of International Affairs and the International Development Department at the University of Birmingham (and with the support of the Association of Commonwealth Universities), begins on Thursday 10 June at 4pm (BST). Professor Richard Drayton (Professor of Imperial and Global History at King’s College, London) will give a keynote presentation and take part in a discussion with Ms Keshini Navaratnam (former BBC World TV anchor) and Dr Reginald Cline-Cole (Senior Lecturer in African Studies at the University of Birmingham). Online questions will also be fed into the debate.

This will be followed by three further webinars. The first of these will examine the legacies of colonialism in the UK, particularly in the light of post-war immigration into Britain from the Commonwealth, and will ask whether the Commonwealth still has relevance and resonance for the current generation descended from earlier migrations. The next webinar will ask whether the past, and the colonial inheritance,  matters to the intergovernmental Commonwealth as it sets about developing international cooperation and creating more fair and equal societies. The final webinar will look at the variety of the Commonwealth’s colonial legacies around the world and the implications that these have for international understanding and cooperation.

The online series benefits from the advice and support of an Advisory Group, whose members are set out below:

Further information can be obtained by emailing Dr Alex May, the Secretary to the Advisory Group, by emailing alex.may@oup.com.

Register for this event
View all ACU events