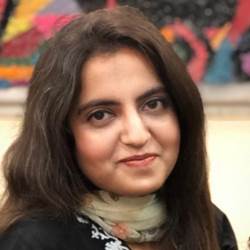 When I found out about the Commonwealth Futures workshop, I was very much enthusiastic to apply for it. Being a student of Defense and Diplomatic Studies (DDS) and a member of the Character Building Society (CBS), I knew that the workshop would be very beneficial for me.

The workshop was a very constructive and productive experience for me. I met a number of international delegates from various countries who shared their diverse experiences and broadened the scope of my knowledge. The icebreaker, group work, and group presentations were all very well organised and thought provoking in making us realise how connected and integrated the world is.

The workshop provided insightful guidelines for student leaders on how to address their targeted audience, and how to utilise their potential in an apt way. The workshop brought to our focus that it is toxic competition that has compromised the sense of leadership in the world. Student Unions can often be politicised and therefore not always effective in addressing the concerned issues.  Hence, youth around the world and students particularly should focus on a collective approach rather than an individualistic one in order to precipitate constructive results. In our final presentation, we focused on the instrumental role that student unions to play in creating awareness about the issues that must be addressed by the students.

The part which I found the most interesting during the workshop was the panel on apartheid, comprising of individuals who were the firsthand victims of this racial segregation. The panel discussed how the introduction of the apartheid system was a development that transformed South Africa for years to come. The panel concluded that South Africa is still impacted by the actions undertaken during the apartheid. The discussion made me realise that how crucial it is to address repression as the intergenerational memory resides for years to come, and when anger is not addressed, it erupts in ways which lead to immense chaos and tumult. Therefore, every event characterised with violence can deeply impact your life with irreversible repercussions. Moreover, the group exercise on assigning violence into different categories unleashed the idea that different contexts can lead to different interpretations of violence.

After attending the workshop, I am convinced that youth leadership is imperative to shape a better world. The students should look up to no one but themselves and be the change that they want to see in the world. The academic curriculum should be their first and foremost priority. However, they shouldn’t restrict themselves to the coursework, rather they should consider and actively participate in addressing issues such as climate change, inequalities and any sort of violence which is taking place around the world. Furthermore, despite the fact that there were diverse views on various issues which were discussed in the workshop, one aspect on which all the participants generated consensus was the climate change. Everybody agreed that climate change was an impending threat and denial of this threat is only a failure. The world must come up with measures to deal with this challenge.

Despite the challenges posed, the crux of the workshop was that optimism never dies, even though at certain times it may lose strength, there is always a ray of hope for shaping a better world. Lastly,  the beauty of Durban was indeed very captivating and I enjoyed my stay over the week. The Durban Beach Front, Phoenix , U Shaka Marine World and the market of Durban were truly fascinating. It was an honour for me to be part of the workshop. I look forward to sharing my learnings with the other students in my university and country through different platforms on such matters.

I am extremely indebted to my university Fatima Jinnah Women University (FJWU), the organizers Association of  Commonwealth of  Universities (ACU) and the host Durban University of Technology (DUT) for this amazing opportunity and I look forward to hearing about  the policy guidelines at the Commonwealth Heads of Government Meeting (CHOGM) in Rwanda 2020.

The Commonwealth, Cities and the World Urban Forum