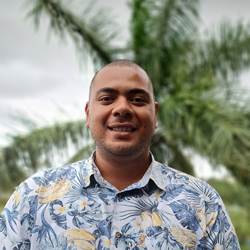 Rufino Varea is currently a PhD candidate at the University of South Pacific, with a vision for a pollution-free Pacific. In this blog, Rufino discusses why urgently reducing marine pollution is the key to maintaining the health of the oceans and the people that depend on it.

The blue economy is a concept serving as a possible solution to address the climate crisis — reducing anthropogenic impacts and safeguarding our oceans and life below the sea. The blue economy embodies an idea where countries may pursue and fulfil economic and social development plans, while reducing environmental risks and ecological scarcities. It’s salient because the blue economy offers opportunities for growth and development, while promoting the protection of threatened and vulnerable ecological spaces.

Among the necessary actions required to safeguard our oceans, pollution is a key component in the blue economy that must be addressed to realise blue growth. Pollution is an increasing public health concern as well as a ubiquitous threat to the health of our oceans – and this needs to be confronted with urgency. The International Pollutants Elimination Network and the National Toxics Network reported this year that pollution is having adverse effects on our marine food web and poses serious threats to the health and lifecycle of marine animals. The IPCC Special Edition of SDG Progress Report in 2019 stressed that anthropogenic carbon emissions are contributing significantly to ocean warming, acidification, and oxygen loss, and our oceans are absorbing more than 90% of the excess heat in our climate systems.

In the Nationally Determined Contributions Synthesis Report released this year, the UNFCCC highlighted that majority of countries have increased their levels of ambition to reduce emissions, but the expected changes in these countries’ total carbon emissions would be small (below 1%) in 2030 compared to 2010. In the case of the Pacific region, the Office of the Pacific Ocean Commissioner reported this year that the overall status of Pacific island countries in implementing ocean-based priorities is making a ‘moderate positive progress’ at best.

Pacific island countries have developed a narrative of what the blue economy should be in the region, and coined this as the 2050 Strategy for the Blue Pacific Continent. Within this regional strategy, marine pollution is one of the key priority areas countries acknowledged that must be dealt with, but scientific data on marine pollution is still very limited in the region (in some cases, non-existent). To close the scientific knowledge gaps in pollution research, and build on baseline pollution data in my island home country of Fiji, my PhD research is designed to study and understand the biological stressors and responses of marine fishes and shellfishes in the face of specific pollutants in our oceans. The outcomes of my PhD research will provide meaningful information for national policymakers and stakeholders (as a model for regional partners) to improve existing legislation or frameworks, including the development of more robust and targeted approaches to waste management, resource conservation, and ecological protection for a blue economy.