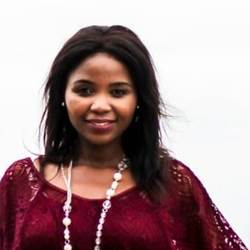 Dr Refilwe Precious Mofokeng has a PhD in marine ecotoxicology from the University of Kwazulu-Natal. Passionate about mobilising communities to protect the planet, Refilwe shares her journey in this interview – and explains why scientific knowledge must be made inclusive to inspire everyone to make a difference.

What originally inspired you to become a researcher in this field?

My first qualification was in mining engineering. During my final year, I worked as an intern at a mining company in South Africa, where I was exposed to hydraulic dredging and the competitive nature of the corporate industry. Although I enjoyed my experience and learnt quite a lot of exciting things, it was during my internship year that I realised that I was uncomfortable with the impact mining had on the environment, particularly on marine and estuarine ecosystems. I then decided to switch qualifications completely and pursued a career in biological sciences instead. My primary intention was to promote sustainable mining solutions, but over the years my interest grew to more than just the impact of the mining industry. My current interest is the impact of climate change on marine ecosystems, and providing sustainable solutions for all stakeholders involved.

What is the significance of the ocean to you personally?

I grew up inland, in Johannesburg, South Africa, and only travelled to the coast for the first time when I was in grade 8. I went to a school near a lake, so up until then, the largest body of water I was accustomed to was a lake. I can still remember seeing the ocean and being taken aback by the vastness of it. I remember the one question I had was: why was there no ocean in Johannesburg? I think that’s when my interest in the ocean started. The more I learnt about the ocean, the more questions I had. So, it’s been an organic progression from my first year in biological sciences until now.

Can you tell us what you are trying to change in our world today, and why?

Given my industrial and scientific background, I’ve always sought to establish and encourage sustainable management of natural resources, in particular the ocean. My research focuses on the impact of contaminants such as metals and microplastics in estuarine and marine ecosystems. I also have a special interest communicating scientific findings to relevant communities to help provide effective mitigation measures. I think this is probably one unique attribute of mine – I don’t only limit my work to the lab environment, but I am also involved in the communication and implementation phases as well.

I cofounded a non-profit organisation which not only helps me communicate my personal research findings – but also findings by other fellow scientists which would otherwise be locked in theses or scientific publications. The subject of climate change, for instance, can be rather abstract to many people, so finding ways to make it meaningful to the general public is always exciting. I strongly believe that if people know better, they can do better. Sharing information with people helps bring about the change we want to see in our planet.

In the context of your own community, what do you believe are the policies or interventions  that need to be implemented to address the climate crisis?

What are the top things the community, society, or politicians and decision-makers can do to help you address the root of the problems you want to solve?

Having been involved in a number of community projects, I have come to understand that education is the best way to bring about change. I’ve learnt that when people know better, they tend to do better. Without a doubt, there’s a lot of information out there already, but we just need to make it accessible to the community.

Engaging the public on issues such as climate change creates an enabling environment for behavioural change. I believe that shifting the problem to future generations is not the solution, and we need to engage in sustainable solutions that will ensure a symbiotic relationship between humans and the environment. I think that the United Nations Sustainable Development Goals are a comprehensive template that can be adopted by governments worldwide to provide effective and harmonised climate solutions.

Can you tell us about someone who has particularly inspired you in your work, and why?

I draw inspiration from extraordinary women in science such as Sylvia Earle, Dr Joanna Newman, and Wangari Mathaai. On a more personal level, I was influenced by my mentor Dr Deborah Robertson Anderson. She was the first scientist I was exposed to who was interested in seeing a project through the implementation phase. She was not satisfied with just a publication – she communicated findings with relevant communities and effected change. When I received the Wonder Woman Award in 2015, Deborah was one of the women I acknowledged as having played a role in my journey as an aspiring scientist.